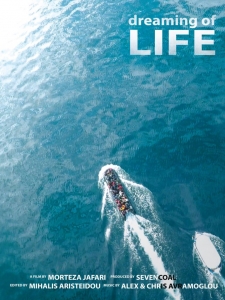 Synopsis: The drama of the refugees has no beginning, but unfortunately no end either. This was the reason for documenting a very small part of the journey, from the Turkish shores to some kind of temporary settlement in Greece. The camera lens becomes the modern-day instrument for creating a historical record of what the journey means. This general overview cannot show the real drama experienced by each person individually, but it hopes to become a thorn on the side of political leaders.

Biography: Morteza Jafari was born in Tehran in 1975. He earned his MA degree in film directing. He has been living and working in Thessaloniki for the past 8 years. His works include short films, documentaries, and feature length films.
Filmography
1998 – Where is the Water
2003 – Oil War
2004 – Born in the Grave
2005 – The Greatness of the Achaemenids Dynasty in Persia
2005 – Zoroastrianism
2008 – Citizen Kill Citizen
2012 – West Dream
2013 – Dreaming of Democracy
2016 – Dreaming of Life