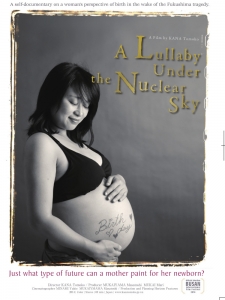 A LULLABY UNDER THE NUCLEAR SKY

2015-Competition, The Costs of Energy

Synopsis: As the meltdown at the nuclear power plant in Fukushima was unfolding, a documentary filmmaker finds out the coincidence that the Fukushima Daiichi Nuclear Power Plant first generated the power on her birthday 40 years ago. Feeling strange senses of fate and guilt, she decides to enter the radiation red zone despite the government’s warning to film what was not on the mainstream media. During shooting, she falls ill and also discovers her first pregnancy at the age of 40. After many years spent on fertility treatments, she is torn between joy and devastation. Eventually she faces difficult choices that involve becoming a mother and protecting her unborn child from the ever-present threat of radiation. She decides to turn the camera on herself. The camera captures her panic, anger, sorrow and hope. What we see through the lens is a filmmaker, a mother, and an individual forced to make difficult decisions in the uncontrollable nuclear meltdown nightmare.

Director: Born in 1971 in Tokyo, she became drawn to the world of documentaries during college years when she was featured on a TV documentary program directed by KORE-EDA Hirokazu. Starting her career as a news director at NHK, she became an independent director in 2000. Her first narrative screenplay “Two by the River” won the Sundance/NHK International Filmmakers Award. Her third film, “Beautiful Islands” (Executive producer KORE-EDA Hirokazu) won Asia Cinema Fund and the Award at BIFF 2009 followed by theatrical openings in the US, Japan and Korea. In 2011, she directed the documentary “Iwasaki Chihiro” (Executive producer YAMADA Yoji).

BIKES VS CARS Scroll to top