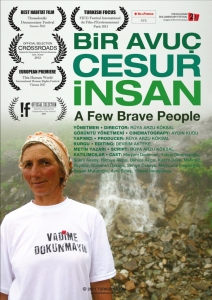 Synopsis:
‘A Few Brave People’, powerfully chronicles the extraordinary struggle of the local people of the Black Sea region to protect their rivers and their livelihood from a government that is keen to sell them to private corporations.

Director:
She made her debut with Forsaken Paths (2006). She won the UNDP Sustainable Development Project Competition Award with her short documentary titled New Life in Old Foça (2007). The Shore (2008) has received lots of credits and won many awards both at home and abroad while driving attention to the destruction on Turkey’s Black Sea coast. Her previous documentary, An Argonaut in Ordu (2010) won the special jury award in Antalya Golden Orange Film Festival. Her last film, A Few Brave People (2011), was premiered at !f Istanbul Independent Film Festival.