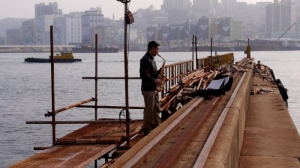 Synopsis: Yeongdo Bridge has opened up again after 47 years, placing the Yeongdo Island at the center of change and revitalization. However, there are some people living underneath the bridge with the hope that things would just stay the same. Among them, there are a temporarily employed welder for decades in the shipyard that is going to close down, an old crippled lady living with her old dog, an old deaf female diver who collects shells and seaweed for a living, and the only and last two grandma fortune tellers who still remain without visitors in Yeongdo, once the street full of fortune tellers and their numerous customers. Regardless of their hope, they all are driven to move out by the city government planning to make the island into a tourist attraction by reconstructing it. Still and all, they do not want to leave their lifelong homes despite all the pressure on them from the city government….

Biography: Youngjo Kim was born in Busan, South Korea in 1970. He graduated from Kyung-Sung University in Korea in 2001. He majored in documentary filmmaking at Paris 8 University in France.

NEXT STOP: UTOPIA Scroll to top